Agreement of Being Gay for 30 Days 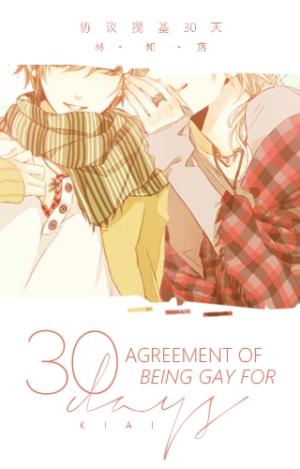 F University’s two most attractive men, Wang Guangning and Zhang Lingyi, constantly competed with each other regardless in what respect.

Whether it was appearance, talent, popularity or even the number of abdominal muscles, they always contested with each other. Even the woman they pursued was the same.

Yet, these two xiao cao¹ who had self-proclaimed themselves as peerless in the aspect of love were completely rejected by the same woman.

Hence, they decided to retaliate against society by becoming gay.

They set an agreement to be gay for thirty days and even especially downloaded the list from the internet, thus preparing themselves to follow these standards in order to become a proper gay couple.

Watching a movie together…Hey, shou shou, remember to lean on my shoulder when you see a frightening scene, alright?

Warming their hands together in the same pocket…Hey, don’t wear that large military jacket outside, it’s really embarrassing!

By learning how to be gay from an unreliable guidebook for couples, two straight guys clash and end up with an unexpected outcome.

Their thirty days agreement has finished, yet can they truly return to their former lifestyles as if nothing ever happened?

[1] 校草: the male counterpart of 校花. It’s used to describe the most attractive guy of the school.