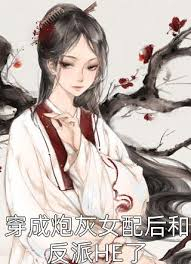 Second title: “Everyone Gets Scared When the Consort Gets Fierce”

She became the first daughter of a marquis’ household. She was swapped out maliciously at a young age and raised in the countryside.

The fake young mistress female lead was a rebirthed girl. The pearl of the capital, and the future wife of the second prince.

In the original novel, Qin Jiu who had been jealous of the female lead and kept going against her, trying in vain to frame her. Unaware of her lacking capabilities, she even tried to steal the male lead from her. Eventually, everyone turned their backs against Qin Jiu and she was killed by an arrow to the heart.

After reviewing the plot, Qin Jiu tore up the script–She doesn’t want to be this villainess cannon fodder! Then in the next moment, she jumped into the arms of Regent Gu Zezhi.

Gu Zezhi, “I’ll let you hug them.” The regent of the dynasty had a fierce reputation of great power and heartless killings. Many people hated him, feared him, and wanted him dead. Then, one day, someone saw the infamously fierce regent holding a little girl in his arms with a pampering expresion. Gu Zezhi kissed her hair and spoke in a gentle voice. “You can get rid of anyone you want. I’m here.”