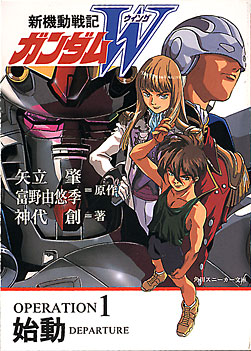 In the year After Colony 195, with the start of Operation Meteor, the scientists’ plan for revenge against the OZ military organization. The operation involves five young boys who have each been chosen and trained by one of the five rogue scientists, then sent to Earth independently in extremely advanced Mobile Suits, one designed by each of the scientists, known as “Gundams”. Their Mobile Suits are called Gundams because they are constructed from a rare and astonishingly durable material known as Gundanium alloy, which can only be created in outer space.

The five Gundam Pilots — Heero Yuy (an alias, not to be confused with the assassinated leader), Duo Maxwell (also an alias), Trowa Barton (another alias, he was previously known as Nanashi (No-Name)), Quatre Raberba Winner, and Chang Wufei — originally have no knowledge of each others’ existence. On first meeting any of the other five, each pilot believes the others to be enemy pilots in new OZ mobile suit designs. Once the young pilots realize that they have the same objective of destroying OZ (and in some cases the same mission), they band together to help each other complete their goals.