I Was Born as the King’s Daughter 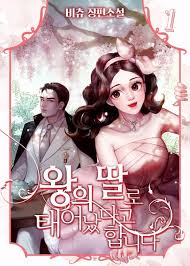 Kim Soo Hee, a not so ordinary office lady, died on the way home to her ordinary husband Jin Soo. She was stabbed by her crazy stalker. Before she lost consciousness, all she thought was about how she regretted taking Jin Soo for granted and how she wanted to live more.

After she woke up, she realized that she was reborn as a baby. She was a king’s daughter, a princess named Kim Sang Hee. But, the first thing she heard was the handsome king telling her mother, “Again, another bitch?! Know your shame!” She was born in an alternate era where women were considered lower than even trash.

So Kim Sang Hee decided using her previous life’s skill (read: enticing men) to at least keep herself alive in the new world and maybe make the scumbag father and ruffian brothers into her side.