Eaten By The Tyrant I Raised 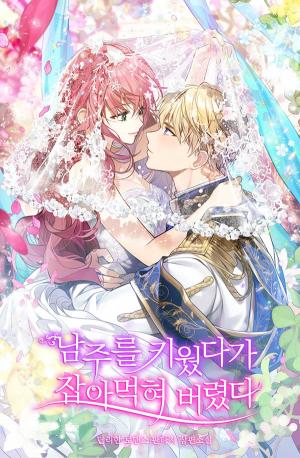 Ronée once happened to save a young boy. Despite his rare golden hair, she had thought it nothing more than a coincidence. “Ronée, love you. i want to be with you forever.” “Thank you for loving me.” But the boy had been twelve at that time, and she had been seventeen. “But we can’t be together.” The age gap was difficult enough, but her father would want to hand her off to a suitable marriage candidate. He was sure to oppose it. So, she rejected him. She had thought that they would never see each other again anyway. However… “There is no other woman in my eyes but you.”

Ten years later, he appeared before Ronée again, having become a king. “Thank you for loving me. But…” You, a king, and / cannot be together. Ronée made up her mind to give him a realistic answer. He whispered quietly to her, his eyes flashing dangerously. “We still can’t be together?” * A very young and feeble child became the ruler of a continent; his soft and frail hands had become the strong and rough hands of a man. The king, Nabel, slowly moved on top of Ronée and wound himself around her like a vine. “Where did you learn a thing like this?”

The childlike Nabel no longer existed. He was dangerous; no, even more than that. Nabel smiled sleepily. “If it’s for you… I can learn even these sorts of things.” At those words coming from the lips of the man with the noblest blood on the continent, Ronée’s eyes widened.