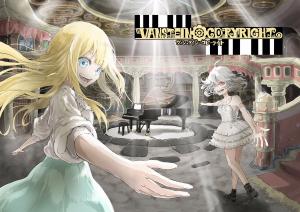 Set in the early 20th century, in Inglez, the capital of the United Kingdom. The surging development of steam engines following the Industrial Revolution had enriched people’s lives, and the city’s economy began to grow. The soil for arts and culture to flourish prevailed broadly, ranging from the upper class to the laborers.

Angela, a seventeen-year-old pianist with a patron, will be kicked out of her house if she fails to win the London Piano Competition approaching in a month.

However, she is in a very unfavorable condition. Having seemingly given up, Angela escapes from her mansion at night and spends her days playing jazz piano at a bar in the street.

Then one day, she meets Adonis, a top-notch pianist and piano tuner.

At a certain request, Angela has to perform a piano piece “Piano Solo for the Right Hand,” a transcendent piece exclusively designed for the right-handed pianist.

Under Adonis’ lessons, her talent is blossoming…

But behind the scenes, a great conspiracy is swirling.

The secret that lies behind the song.

The men who are active in the underworld.

In the misty city of London, speculations of each individual intersect and become intricately intertwined. Unbeknownst to them, the piano played by a seventeen-year-old girl is the key to unraveling the mystery.