Trinity Blood – Reborn on the Mars 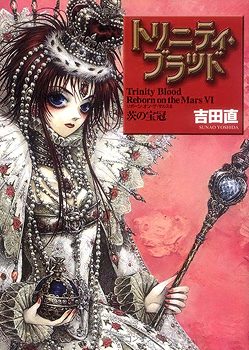 A mysterious terrorist organization is hell-bent on orchestrating a war between the New Human Empire and the Vatican. Special Ops AX Agent Abel Nightroad teams up with a spunky young novice named Esther to try and stop Gyula, the bloodthirsty Marquis of Hungary, from unleashing the legendary Star of Sorrow.Set against a neo-gothic backdrop, this second Trinity Blood series–connected to the Rage Against the Moons series–promises plenty of action and intrigue as Esther and Abel struggle to save the lives of humans and vampires alike!