Trinity Blood – Rage Against the Moons 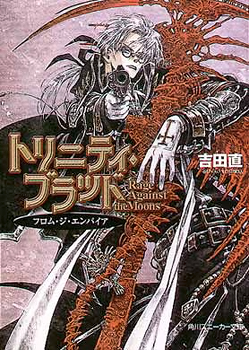 The series takes place in an indeterminate time in the future, 500 years after an apocalyptic war between all of Earth’s nations destroyed civilization, when humanity has reestablished itself. In this future world, the Roman Catholic Church has become a major military power, whose goals include the protection of humanity against the vampiric Methuselahs, who war upon humankind (or “Terrans,” as they call humans). The seat of power is the Vatican, an attractive place with traditional European architecture; it is likely the same Vatican city in the real world (albeit perhaps rebuilt following the previous war). The Methuselahs are themselves another major political and military force. Their capital of Byzantium (presumably built on the site of the real world’s Byzantium, now Istanbul) appears as an elegant metropolis, surrounded by a field of particles which filters out UV radiation, thus protecting the Methuselah population.