Life as a Tower Maid: Locked up with the Prince 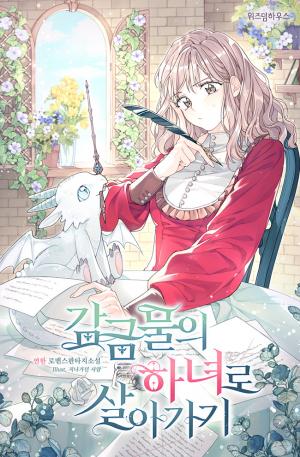 I transmigrated into a novel and reincarnated as the maid of a prince who was trapped inside a tower.

It was depressing enough to be trapped in a tower, but the situation that I found myself in as soon as I transmigrated was straight up dangerous.

The original owner of this body, Rosé, threatened the prince and forced him to kiss her!

To make matters worse, Rosé was completely obsessed with the prince, and while trying to monopolize him, she dies a futile death!

We’re right on track to [death via decapitation] as soon as the prince escapes the tower.

So instead, I offered to make a contract with the prince, aptly titled as ‘The Contract for the Life and Death of Rosé Artius’.

No skinship at all! As long as he guarantees that I’ll live until an old age, I will devote my diligence and loyalty to the prince!

But somehow… the prince’s gaze was a bit dangerous. And inside the tower, we were totally alone.

The breath that lingered on my lips disappeared as the stranger moved away.

I stared at the man who kissed me just now.

Under those dark eyebrows were red eyes that were exceedingly cold.

I was instantly bewitched. I couldn’t look away, as if there was an irresistible force coveting my gaze. Because he’s so handsome.

I shuddered as the sweet voice whispered next to my ear. Only then did I come to my senses.

I laughed awkwardly to fill the silence. Ahaha, I really don’t know…

At my words, Albert grinned. It was the forced, soulless smile of a salesman. Nonetheless, he was still breathtakingly beautiful.

He took the wand that I had been holding.

In the novel, the maid Rosé always asked for a kiss from Albert in exchange for letting him see the wand.

In short, at this very moment, I was digging my own grave.