How to Extend a Marriage Contract 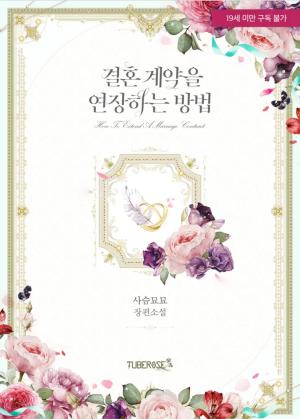 Emily, the only daughter of a Count who was looking for a marriage partner to inherit the title.

And Kyle, the leader of the Order of the Holy Knights, who just appeared in front of Emily.

“I need you and you need a decent husband.”

Two people who are supposed to pretend to be husband and wife during the contract.

But Emily fell for Kyle during her fake marriage,

Three years goes by so quickly that their contract ends.

Kyle, who lost his memory in a timely manner, returns from the expedition.

‘So he doesn’t remember the marriage contract?’

An idea that Kyle might be a little scared to know crossed Emily’s mind.

“I think I told you before.”

The harsh voice gave her goosebumps. As soon as the man’s solid body fell off of her for a while, her body floated into the air. And when she closed her eyes and opened up, she was lying on the bed.

Before she could get up, Kyle climbed on top of her. And slowly unbuttoned his cuffs.

In the meantime, his gaze did not fall from Emily.

His expression seemed dull, but his eyes were burning. And the lower body that was touching her was already….