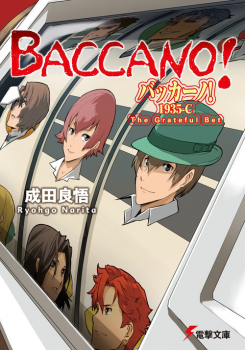 “Baccano”, which Narita translates as “stupid commotion”, is Italian for “ruckus”. Each of the stories in the series involves several unrelated plots intersecting and crossing each other as events spiral farther and farther out of control. Immortal alchemists, mafia operated speakeasies, and many other elements of pulp fiction mashed together for a world straight out of the movies.

But the following night, one of the alchemist started to devour his companions. To escape the threat, the alchemists scattered all over the world. In America during the temperance movement, centering around the liquor of immortality, the “stupid commotion” starts!