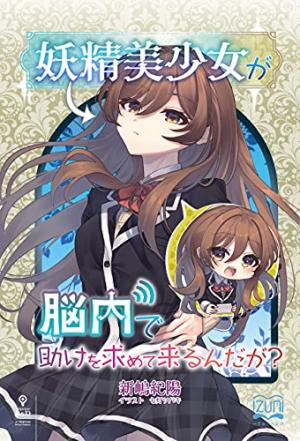 Atsushi Yamagami is being avoided in his class because of rumors that he had hit the face of a girl student at another school and was sent to the hospital in retaliation.

That Atsushi, he had a little special ability.

He’s able to sniff out the scent of supernatural powers… something like that. Thanks to that ability… no, because of the ability, he finds out that Yuri Shirasawa, a beautiful girl that was regarded as the number one or two at school, is a telepathic person.

Only Atsushi knows about her telepathy. Perhaps because of it, Yuri has come to send telepathy to Atsushi frequently.

『”Atsushi-san, please help me collect the materials for the game, help meー”』

『”Atsushi-san , please tell me the answer to this question, tell meー”』

『”Atsushi-san, I don’t mind with steak for dinner today. steakー”』

『”Why it sounds as if you’re going to eat at my place? “』

『”Ah, Atsushi-san!! These extroverts invited me to go play, I humbly request for your assistance as soon as possible!!!”』

Yuri goes to the class with mysterious impression as she rarely talks, but in reality, she’s an introvert, and so, if people around her invite her to do something, she doesn’t know what to do.

And Atsushi who could hear her telepathy, is being used by her, every time she wants to decline the invitation.

This is a romantic comedy that happens in the telepathy behind their silence… something like, a Telepathy Romcom.