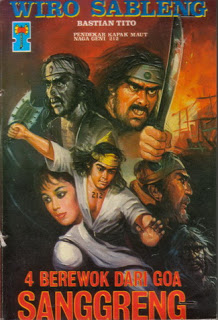 Wiro Sableng or Pendekar 212 is a novel series written by Bastian Tito.

A youth with the monicker Wiro Sableng, originally named Wira Saksana, shouldered a burden of vengeance over the murder of his parents, who were killed when he was a baby. If not for being rescued by his teacher, the infamous Crazy, Mighty Martial Artist Sinto Gendeng, Wiro would have met the same fate as his parents.

Taken as a disciple by Sinto Gendeng, Wiro became a formidable martial artist with his weapon Deadly Fire Dragon Hatchet 212 and was imprinted a tattoo “212” on his chest.

With his supreme skills taught by Sinto Gendeng, and accompanied by his formidable Hatchet, Wiro roamed the lands and seas of Indonesia and beyond, taking down criminals and evil martial artists and fulfilling his blood vengeance, acting funny and crazy while he was at it!