Why Did You Summon Me? 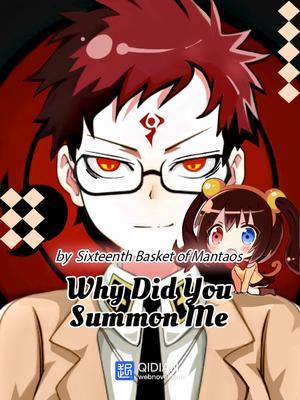 Imagine being forced to live, after death, as incorporeal bodies trapped in a vast space of nothingness for thousands of years, with nothing to do but exchanging past memories with other cohabitants (read: weirdos). Everybody wanted out, but there was no way to leave the Void…

Until one day, a young man was finally summoned, as a powerful but reluctant mentor, by a bubbly and motivated but completely naive young girl. Baiyi, finally out of the Void, was the only one who could save all of the other 32 souls from their prison and his summoner might just be The Key to their freedom.

However, Baiyi had to use the techniques and abilities the other souls had taught him throughout the years, and together with his own extensive knowledge of anime and game tropes from his shady and dangerous past as an otaku, to face the biggest challenge of them all: training the clumsy young girl he was forced to partner up with… into a competent sorcerer!

This is a story of heroic adventures, cunning strategies and romantic tales. How will our MC thrive in a world completely strange to him? Where will his ambitions and abilities take him in the palace?