When The Terribly Unlucky Villainess Returns 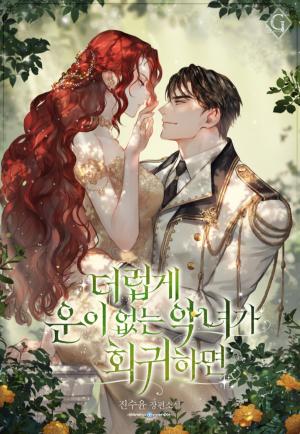 They say that there are people whose noses will still break even if they fall backward.

If you could find such a person, it would be Hapless Reyna.

She, who had constantly failed in her terribly unlucky life, had been sentenced to death. She was an unfortunate woman even until the end.

However, she suddenly returned one year into the past.

Being aware of her bad luck, Reyna gave up on everything without considering changing the future even after returning.

While heading to the temple to end her marriage, it was truly ‘great’ of her to meet the frivolous and boring man called Einar.

He drew nearer to her, the close distance allowing them to feel each other’s breath. The two stared at one another, and no one bothered to retreat even an inch.

“Between the Lady’s luck and my luck, which one will win?”

Einar lips arced in a fierce and competitive smile, revealing his teeth.

“If the Lady doesn’t die after a year, the victory is mine.”

Who will win the bet?

Reyna, whose nose will still break even if she falls backward, versus Einar, whose simple breath will cause a flower path to bloom.