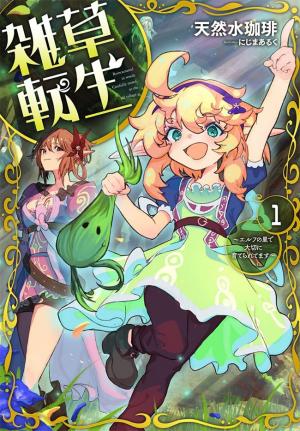 I noticed that I am a weed in the forest, but for some reason I can think and have an ego. Besides, there is also strange knowledge. I have no choice but to live for the time being, even though I feel something is wrong with the status screen and level like a game.

i don’t think I was originally a human being, but I don’t remember much about it.

Aside from that, the light is delicious. When I thought that photosynthesis was good, I met a high elf girl who could hear the voice of plants.

It’s great to be able to talk. For the time being, while giving fruits, I was pulled out by a girl and went to the elf village.

I’m being carefully raised, yeah? Somehow it smells like spring.

Apparently, the elves are a persecuted and exiled race.

However, because it looks good, there are some undeliverable people who aim them as s*aves.

A weed that already lived with elves like their families struggle to protect everyone. Evolve!

This is a story of a kind-hearted weed that protects an elf, or a “world tree” that will eventually lead many.