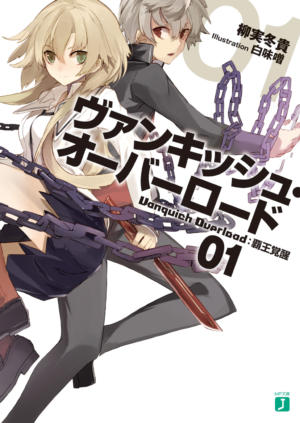 In an age where everything is determined by the realization of abilities called “factors,” a young man of Argus City named Kiryuu Masato is concerned about whether his factors will ever awaken, when one day after school, he’s attacked by two female assassins. In the midst of the danger awakens one of the most powerful abilities—known as a “King Factor,” and regarded as one of the most dangerous, the “Vanquish Factor.” This newly awakened “Vanquish” ability transforms the female assassins Airi and Lizette into his slaves via the “Aggressor’s Chains,” and he manages to evade danger for the time being. However, now that one wielding the “King Factor” has appeared and can offset the balance of world power, it’s safe to assume that other “Kings” will continue to send assassins… But together with these two strange girls, Masato has been unwittingly drawn into a “War of Kings” to determine who reigns supreme. Chained to their fate, they continue on in this militaristic survival action series!

As the Vanquisher, what battles will unfold for our protagonist Masato!?