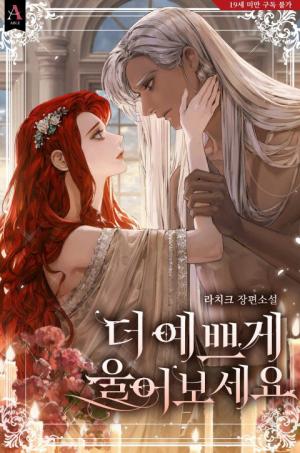 Sleeping with him was a very impulsive decision.

Yesterday, Damia’s first love that usually filled her with anxious joy, broke her heart with a cruel rejection:

Her manipulative step-brother smiled at her.

“Didn’t I tell you? You will eventually come to me.”

Damia was fed up with all these games.

So she seduced and slept with the man who had just arrived in the north.

The beautiful eyes belonging to the woman subject to terrible rumors held no lust, instead Akkard found the ballerina to be rather clumsy and pure.

“Your crying face is pretty. Cry a little more.”

He grabbed Damia’s ankles that tried to flee, overworked from his persistent ardor, but that only made him covet her even more.

Damia, lying beneath the ferocious beast, literally cried herself hoarse.

The man kissed all of her tears, and painstakingly licked her eyelids.

And soon he laughed greedily.

“I keep crying under me from now on.”

The man’s lips whispered until the legs broke apart.

….It seems that he had chosen the wrong person to play fire with