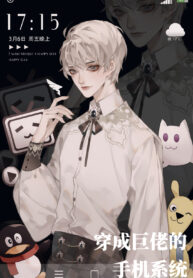 Software engineer Wen Fan accidentally found himself transmigrated as the floating ball system in a mobile phone. He is as tall as the height of a thumb with a ram capacity of hundreds of billion gigabyte.

He slept while hugging ‘QQ Penguin’, rode on the kangaroo of “Meituan Takeaway”, poked the voice bubble of “WeChat” and lived in the mansion of “The Sims”. He could also see through all network data, decipher all account passwords, and even dig out all lottery accounts.

Aside from the fact that he could only live on the phone screen, Wen Fan had indeed reached the peak of his life.

The only bad thing about this was that owner of the mobile phone likes to r*pe him visually. And he even likes to dress him up.

Lou Wei who was deeply addicted to the game of raising a sim said, “Call me hubby.”

Lou Wei, the founder of LouV Technology, the number one gaming company in Z country, has recently begun to research software every day to come up with a new game.

As soon as the news came out, people all over the country wanted to squeeze into the research and development room in order to be the first to experience the game.

After all, Lou Wei is the number one holographic game designer in the world. He can simply design any game and it would be popular around the world.

Countless LouV fans waited anxiously for the new game to be released. They waited and waited and finally, the big boss started the live broadcast——

The big boss sat in front of the camera with a serious face: “We are currently looking for good looking erot*c fashion designs for my sim.”