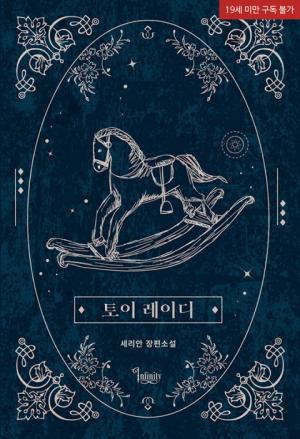 “I will…play with Your Highness.”

Eloise, who entered the palace as a maid under the order of the Empress, is trapped in a dark playroom and becomes the Crown Prince’s toy. Rishid, the unfortunate crown prince whose mental age has regressed and suffers from aphasia.

He was like a broken doll, but as he worked with Eloise, he gradually regained his ability to think according to his age and began to speak.

However, the Crown Prince does not let her go and tries to tie her to stay by his side even when his illness is cured and were no longer needs a playmate.

But as a different type of “play” opponent.

Eloise is trapped in the Crown Prince’s palace and loved by him day and night, but she is afraid that one day she will be forgotten like a toy she used to play with as a child.

“Did you have fun playing with me?”

He has no intention to let go of his toy.

“What would they all think about when they see you? Everyone must be busy trying to get a bite. For being so naughty.”

Eloise shook her head frantically whenever he uttered harsh words. Tears dripped down her eyes filled with unjust light and soaked his fingers.

“I let it go freely, and everyone in the Imperial Palace is wagging their tails.”

Eloise couldn’t answer any of his words.

‘Because I didn’t know what more severe corporal punishment would be inflicted if I did. At times like this, I knew from experience that it was best to match his mood.’

“You need to be disciplined,” he tilted his head.

“Come up,” he said, spreading her legs wide.