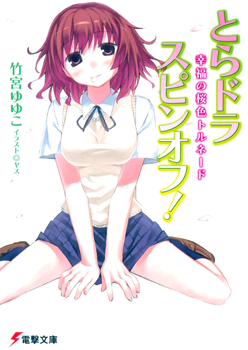 1. The Cherry-Coloured Tornado of Happiness (幸福の桜色トルネード)

Tomiie Kouta is a 1st year high-school student. One day, Kouta meets with Kano Sakura, the younger sister of Kano Sumire who is “everyone’s brother” and the Student Council President. Kouta is attracted to the bright and cute Sakura, but Sakura was a naive innocent girl who did not know her sexual attractiveness!

Kouta, who is led to help Sakura study for her failed mid-term test retakes, struggles with immoral imaginations and thoughts being in front of Sakura… What’s going to become with the love between Kouta, who is not used to being happy, and Sakura who has no idea of whatsoever…?!

Adding to the story of an destined-to-be-unfortunate boy and an innocent girl, a new story of Taiga and Ryuuji is also included– Super Romantic Comedy “Toradora!” Spin-offs appears!

Five more stories from the world of Toradora! The first relates how Taiga got a bit overweight on all the wonderful foods of fall-time, and her adventures in losing that weight. The second recounts how it was that Haruta showed up at the candy-store with an older girlfriend, shocking both Taiga and Ryuuji. The other stories focus on other characters.

3. Take a Look at My Lunch Box (俺の弁当を見てくれ)

Ten more shorter stories, each focusing on one or another of the Toradora characters. Takemiya declared it to be her last adventure in the world of Toradora.