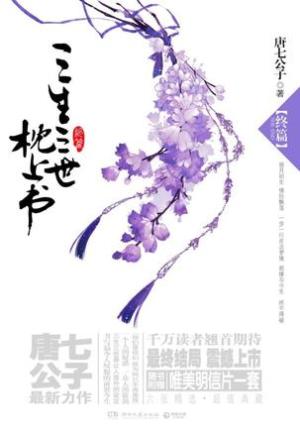 The start of another one of Tang Qi Gong Zi’s tale of a past life and present life.

If persistentness in the end will still be in vain, who would use up this life to entirety, only to watch over an untouchable love?

If a persistant attraction of more than two thousand years, is to be put down right now, to be cut off, would there be tears to be poured?

Even if honored with the status of a God, Dong Hua would still perish like features.

Even as the female monarch of Qing Qiu, Feng Jiu would still fade away in time.

Although what is unknown, is that when wind and clouds are gone, when he is still walking through never ending years and ages, and occasionally brushing past her, this once legacy making God, would he still be able to remember, from his former days, that little red fox with a patch of snowy white fur on her forehead that had once rested between his sleeves.

That commanding Queen of Qing Qiu of ancient times from the deity clan, whether she can still remember he plucked a strand of Fuling flowers for her in the bygone era.

Two thousand years of obsessions, but in exchange for many missed opportunities in love.

If ultimately we have no chance to be together, so why let us meet each other in this life, a glance a million years?

In the middle of a foggy dream, one walks through whose shadow, destroys whose yearning, and buries whose current life and past life?

“Emperor (Di) and concubine (Ji) who are floating ups and downs in the dream land, what do you really want?”

“All I seek in this lifetime, is merely that he can see my shadow in his eyes.”

There is a saying that the feeling is deep but the fate is shallow. She is the one with deep feeling but her fate with Dong Hua is shallow.

“He is very good. Just that he and I have no fate to be together.”

How does the Mandate of Heaven determine our predestined relationship? One person’s doubt, everyone get caught in a vortex.