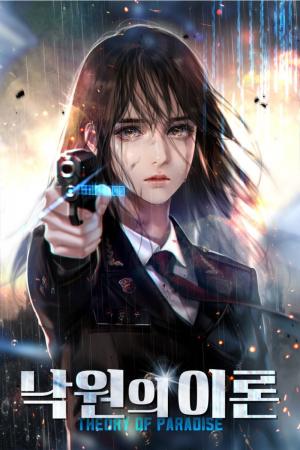 A land covered with snow-white sand, an air with a foul smell of sulfur, and a land where it was difficult to breathe without a purifier. A gloomy future where even tomorrow’s life could not be guaranteed.

Faced with a desperate crisis, humanity sculpts the dragon’s corpse to create eight cities. The chosen move to a new city, and the unchosen are left in the desolate Dead sea.

The ‘Theory of Paradise’ will be supported by three pillars. The three of them will be attending the school at the same time, dreaming and sharing the same senses, so they will surely acknowledge each other’s presence.

1000 years after the city was built, three youths who were abandoned and destroyed by the world faced an old prophecy.

“Tell me, you will never love me.”

“You said there was a light outside the tunnel, but to me, the light was you.”

Even in the gloomy dystopian era, the three main characters, Eun Woo, Jae Hee, and Yoon Hwan, were constantly in dynamism. They faced their fate head-on and continued to carry out their own beliefs that they firmly believed on. Through this, it showed how important “love” was in choosing the direction of life, how courageous choices were gathered to change the world, and how overwhelming the ‘love-induced revolution’ was.

‘Theory of Paradise’ was the story of three people who had fallen into hell and had lived desperately, trying to change the world for the one they love, and eventually finding light in the dark.