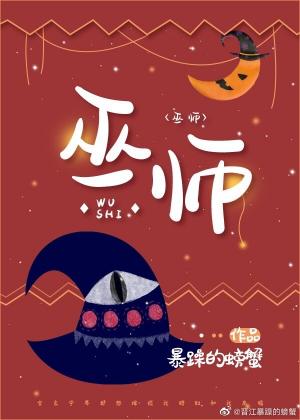 Wu Miaomiao was the last in line of the Witch Clan. When she was 2 years old, her master found her a fiancé. When she was 18 years old, she felt that it was time to meet with this fiancé. And so, she carried her school bag and took the train into the city.

“My dearest husband, come follow me back to the mountains.”

Ji Lang was amused. Amongst the ghosts he had met, this was the first time he met one who came to groomnap.

“In that case, shouldn’t we first have our nuptial night?” said Ji Lang. Wu Miaomiao tilted her head. She felt it was logical and headed home with her husband.

Ji Lang was the reincarnation of Ephialtes. It was said that if he was to be fully awakened, he would possess the powers to drown the entire human population in their nightmares. He could enter into anybody’s dreams, probe into their dreamscapes and pry into their deepest secrets.

Because of this ability, for these 20 years, Ji Lang could not have a good night’s sleep. He was forced to sink into all sorts of nightmares till the day he met the girl from the Witch Clan. On the first day he met her, he slept on her bed.

The people from the metaphysical world feared the power of Ephialtes. They were constantly wary of him fully awakening his powers and destroying the world afterwards. They planted spies near him to put an end to him upon signs of his awakening.

Wu Miaomiao: “I heard that you people want to bully my dearest husband, I will curse you all oh~~~”

Big shots from the metaphysical world: “When are the two of you going to divorce?”