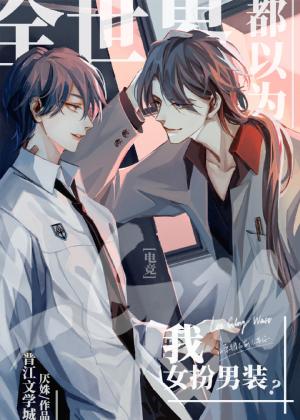 After transmigrating into a danmei novel, Xue Lan became a part of the protagonists’ game team: a cannon fodder who plotted against the lead gong1 and was eventually kicked out of the team.

Initially, he only wanted to play and watch people be in a love-hate relationship as they teamed up. Unexpectedly, one day, he was mistaken for a woman who entered the club dressed as a man.

Teammate A: Lan Lan, these snacks are all for you.

Teammate B: Lan Lan, let me know if you need any materials.

Fans ABCD: Lan Lan, you’re our baby and our pride! We’re cheering for you!

Xue Lan passed the garden carrying snacks and gifts with gloom, but then saw the lead shou2 Duan Wenzheng sitting by himself under a tree.

Duan Wenzheng was a fierce teammate who rivaled Wen Yan in the rankings all year round. He just lost a solo3 practice match and seemed to be dejected.

Thinking he would soon become the shou, Xue Lan stuffed all the snacks in his hands.

Xue Lan with a sparkling gaze: Don’t be sad, we all lose and win in competitions. Next time you can tell me anything you’re upset about!

Duan Wenzheng who was pondering over life problems, what to eat for lunch, and didn’t properly play the practice match: ?

Xue Lan was forced to come out of the closet after his identity was exposed. Everyone burst into an uproar. The media interviewed the teammates about their views on this.

“Very surprised.” The interview spiraled out of control after Duan Wenzheng casually took the microphone: “This is the second revelation that has left me shocked.”

The media hastened to dig into the details: So, the first is?

Duan Wenzheng: The partner of his coming out—is me.