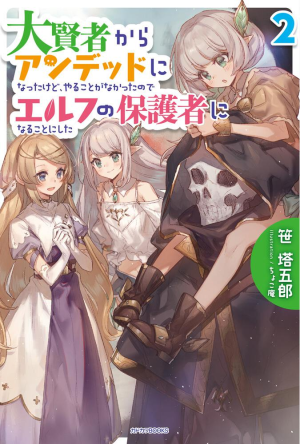 Mozef was once known as the “Great Sage” and was known throughout a certain continent.

However, he, too, is unable to conquer old age and lives out his natural life of a hundred years and a few decades, with the frontier lands as his final resting place.

Then Mozef found that his body had turned to nothing but bones.

Mozef, who had mastered magic, had unexpectedly become a Lich, the highest form of the undead.

After becoming a Lich, Mozef had nothing to fear from aging, his body became lighter and he was enjoying all the good things that come with it.

However, Mozef, who thought he had reached the end of his natural life, had nothing to do. As he decided to live in a remote area to pass the time, a silver-haired young elf began to appear here and there. Although she was wary at first, she soon warmed to Mozsef’s gentle nature.

The elf lives alone with her sister in this remote area, and the sister is determined to become an adventurer to give her sister a better life. It was Elysia, an elf girl whom Mozef had once saved. Mozef, who had nothing better to do, becomes their guardian and begins a new life as the Great Sage-turned-Lich.

“Ho-ho, though I would already be dead.”