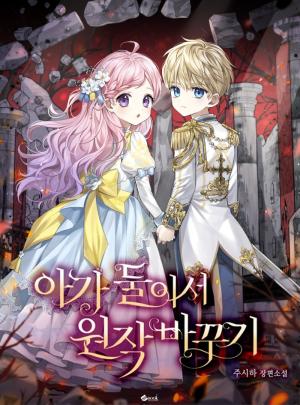 7-year-old Ellie possessed Princess Ellia, the same age, from [The Tale of the Queen] that her brother read to her every night!

Princess Ellia, the unlucky protagonist, was dethroned after being swayed by the tricks of bad subjects, and then destroyed the world with her mana running out of control.

However, Ellie knew the right answer to what to do thanks to reading the book.

Become a good queen, even endure the throne, and save the world from destruction!

In the meantime, she met the 8-year-old duke, Cleos Bernt.

Ellie’s eyes keep falling on Cleos, who is so pretty and handsome, yet…

As it turns out, Cleos lost his parents in an accident involving the previous kings.

Ellie, wanting to appease the Duke who hates the royal family, begins to cling as best she can, using her wits.

“I want to be friends with Duke Bernt.”

“I want to get along, but do I really need a reason? There’s also something that’s called just because I feel like it, you know.”

Even though he hated the royal family, Ellie’s cuteness was inevitable.

Cleos, who rejected Ellie with a strong iron wall, starts to get into Ellie at some point, but…