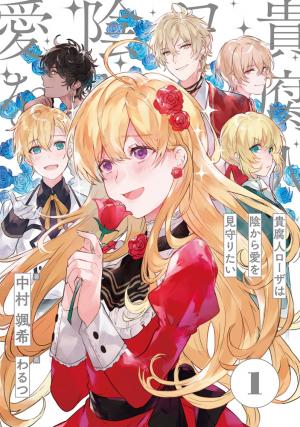 The daughter of the Earl, Rosa, was known for her beauty and compassion. But in reality, she was a rotten lady who pursued her ‘moe’ by making delusions of ‘rose love’, the romance between men.

Her dream was to become a nun and write down a ‘bible’, spreading the rose love throughout the continent.

As the preparation of entering the priesthood, she donated to the monastery (as a bribe), strived to improve literacy (to prepare for her missionary work), and made humus for her territory (as the symbol of rottenness). One day, she met her half-brother, Bernard, a fourteen years old boy.

Concluding that Bernard was the ideal ‘uke’, a talented person that only appeared once every a thousand years, Rose devoted herself to ‘Bell-tan’s Harem Plan’. However, her rotten behavior was mistaken for noble deeds. The princes, princesses, and even the foreign princes started to get involved, and she began to spread her influence all over the country…?

This was the story of Rosa von Langheim, nicknamed the “Rose Angel” as the symbol of her nobility and charity, who was the most rotten lady of all.