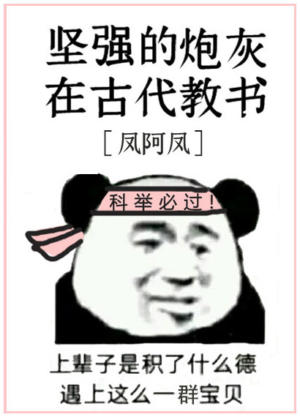 However, during a certain day, the system pointed out to her, this little beggar was a big villain, and Xu Zhen this small cannon fodder would sooner or later die due to the big villain.

She quickly retreated 3 feet away from the little beggar, kneeled down and kowtow, “I’m wrong already, I won’t dare to ever make you recognize words and do homework, please spare me and let me return to the countryside to live my life.”

With a cold expression, the little beggar calmly told her, “Begging for forgiveness now? Too late already.”

Xun Qianchun was born from a general family, but just because her mother was huji (huji is used to refer to northen or western females in ancient time), it caused her entire family to be crowned with the criminal charge of having secret ties with the enemy country. Under the emperor’s order, Xun Qianchun’s entire family, from the old to the young, were all brought to the gallows.

Only her, feeling indignant in her heart, she drifted and lived on without a purpose.

That year when she was 14 years old, when she fled to the front of Jiangling’s bookstore, a pair of delicate and fair hands held her up.

From then on, her drifting and miserable life had a fixed residence.

There was another person’s name in her heart that was filled with cold frost.

Unfortunately, recently, this person seems to not really like being intimate with her anymore.

She was extremely bewildered and did not understand why. Could it be that I have done something wrong?

Someone was curious as to how this evil person was like in private, and thus climbed over the wall, wanting to go investigate about it.

Who knew that, before he even entered the house, he saw a gorgeously dressed thing rushing head-on while happily cheering, “Madam~ You are finally back~”

Later on, when chatting at a wine shop, someone asked him, “The person who rushed over was Zhenbei King’s pampered male?”

That person trembled and said, “No, it was that person whose temper was good, kindhearted, dignified and sweet-tempered, once saved tens of common people……”