The Pheromones Say We Have No Chance 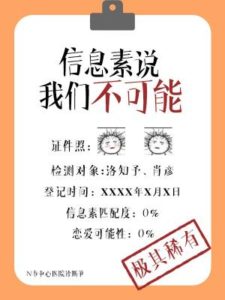 Luo Zhiyu and Xiao Yan, both presenting in the middle of a gang fight, are carried to the hospital one after the other. One becomes an omega, and one becomes an alpha.

Probably because the two were in the middle of an intense brawl at the time of presenting, their pheromone compatibility is an historically unprecedented 0%.

Other than sometimes fighting and getting on bad terms every time they meet, these two people put together are definitely safe — to the point that when there are not enough hotel rooms on a school trip, teachers put them in the same room.

Teachers: Anyone has the potential to date in high school, but these two definitely have no chance!

The principal catches an alpha and an omega walking on the side path in the evening, supposedly dating —

Students: There is no way, those two are definitely innocent!

Everyone, including Luo Zhiyu himself, thinks that there is no way between them.

And then one day, Luo Zhiyu gets permanently marked by Xiao Yan.

Luo Zhiyu: ? No, the pheromones say we are not compatible, we must believe in science.

Xiao Yan pulls out the new compatibility report, dropping it in front of Luo Zhiyu: Enough nonsense, go steal your hukou identification so we can get married.

Luo Zhiyu picks up a stick and swings it at Xiao Yan for two whole blocks.

Xiao Yan brings the person into his arms, kissing him against a wall.