The Owner of the Summer Villa 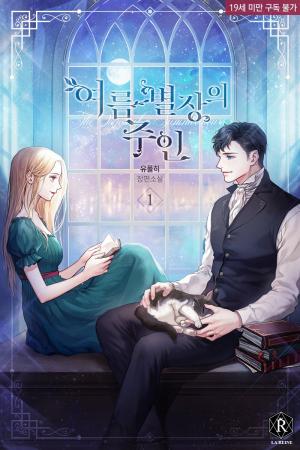 Charlotte Blyth, a girl who dreamed of becoming a heroine in a romance novel. With her beautiful first love in her heart, she chooses to marry a great nobleman. Her life, which seemed to be happy, envied by many people, falls into hell one day.

‘My husband is dead. The body disappeared. Now, everyone doubts me.’

Born as the fourth daughter of a fallen baron, she was chosen by Count Bell, the head of the highest family of the Esseln Empire for her outstanding beauty.

Contrary to the expectation that she would enjoy a rosy marriage, like the heroines of the romance novels she had been reading all the time, her marriage began to crack from day one.

As if it was an escape from such a marriage, she immersed herself in writing romance novels, and as a result, she succeeded in all her three published works.

The day when fate pushed her back, thinking of a new future, she faces a living room stained with blood.

Looking exactly the same as the plot written in her novel she wrote.

Frederick Point of view: Six years ago, he met her as a19 years old boy at a summer cottage in the countryside.

He also fell in love with her at first sight and sent a letter to her every night.

The two’s sincerity was conveyed to each other, and they thought that they were each other’s special person, but suddenly she married another man and left the village like that.

Six years later, standing in front of her, she has become a witch who killed her husband,

She hides her boyish smile behind her sullen and deep eyes, and he appears to be the only person who can save her.