The Marriage Life in the Grand Duke Family Is Too Easy, Though 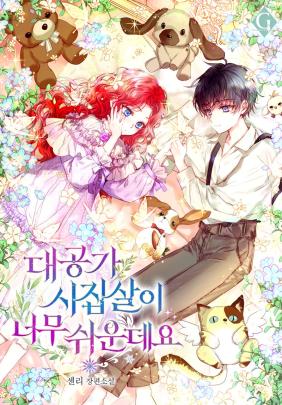 I possessed the ex-wife of my favorite character.

The body that would die even before the original story began due to an infectious disease.

‘Oh, what else should I do? If I’m going to die anyway, I have to be a fangirl of my favorite character as much as I want!’

However, I survived with the awakening of a power that wasn’t in the original story.

What was worse, in the meantime, I had hit on my in-laws so well, though?

“You are probably the only one who puts your life in Achid’s pictures more than the commissioned.”

Wouldn’t Personality Breaker 1 who was full of chills, my father-in-law, help me with my fangirling?

“Then haven’t I told you to not look cute? There are many criminals in the world who aim for cute kids like you.”

My mother-in-law that was once called the ‘Haint’s Mad Dog’ the Personality Breaker 2 overprotect me severely, let alone being cold.

And my innocent husband started to flirt with me all the time.

“My hair surely is a bit messy.”

“Not at all. I’m just saying that I want to keep touching it all the time because it’s so soft.”

I thought my existence was too dangerous for him.

It turned out that the dangerous one wasn’t me, but him, right?