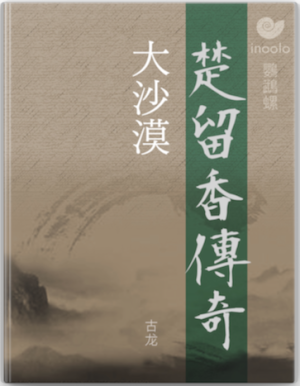 Returning to his houseboat, Chu Liuxiang discovered that Su Rongrong, Li Hongxiu, Song Tian’er had been kidnapped by Hei Zhenzhu (see Book 1). Chu Liuxiang immediately set forth on a long journey to the Great Desert [i.e. Gobi] with his friends, Hu Tiehua and Ji Bingyan. In the desert, they encountered the most beautiful, the most vicious, the most ruthless, but with the highest martial art skill – foe, the Stone Avalokiteśvara (Shi Guanyin), while were also being sucked into the political struggle within the tiny kingdom of Qiuci.