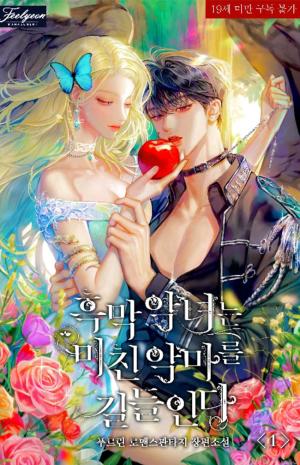 Isabella was burned at the stake along with her mother. All because of her father who accused his wife and his child of being witches in order to live alone.

If I could save my mother. If only I could have my revenge. I’d give my soul to the devil.

The moment she stops breathing, will she hear the devil’s whisper?

The devil decided to bring Isabella back three years ago.

In return, he wants her to take the ‘Son of the Demon King’ out of the magic tower.

You told me to take him out. You didn’t tell me to give him back?

Isabella offers a contract marriage to the ‘Son of the Demon King’ for the sake of survival.

“The Duke seems more concerned about his successor than his crazy son.”

Kaiden said languidly, untangling the string that was tying up her shirt.

“Should I live up to your expectations from now on?”

Her straight collarbone and a long neckline were revealed through her untangled collar.

For a moment, a calm wave arose in her eyes.

Her heart rate was slowly speeding up because of the strange feeling of embarrassment or surprise.

“Be my husband instead.”