The Duchess Who Sees Ghosts 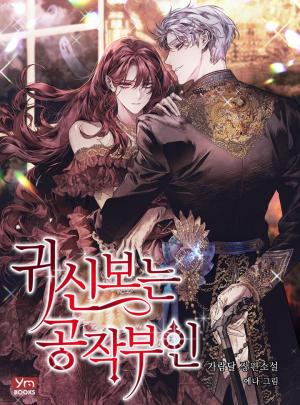 Y​eonhee lived as a shaman who served God since she was young.

It was a life where she drew amulets and swung her fan when she was dealing with people.

​But death came in an instant.

She was born as ‘Julia Robinheartz’ and started a new life.

Would she be able to get out of the bridle called shamanism now?

If only she can live a normal life…….

“Please go to the temple for that.”

[It’s so unfair! I can’t believe I was struck by lightning while I was in the street and died….!]

But even in this life, there are endless ghosts ​who asked for a release to their revenge.

“My name is Rio Sirius Ephesia.

I am the Duke in Ephesia Dukedom and the current commander-in-chief of Proren Kingdom.”

“Will you marry me?”

He seduced Julia by showing off his wealth and possessions.

I already have letters of proposals piling up like a mountain, but let alone marriage, I am busy as hell dealing with ghosts!

​As soon as she rejected him, he gave her business as if he had been expecting it.

It was indeed uncomfortable, but because blank cheque had been going back and forth in front of her she couldn’t get herself together.

​First of all, let’s earn some money.