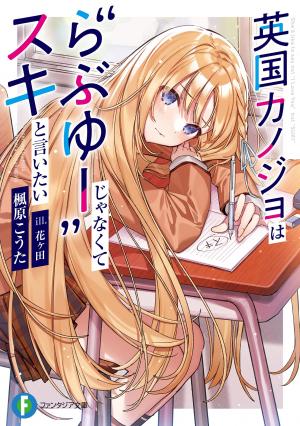 Kisaragi Manaka; a high-school student who, ever since giving up on his first love, had since avoided falling in love again.

However, after discovering that he was living in the same apartment building as the classmate rumored to be of British descent, Hiiragi Stella—

—he found her image to be different from when she was at school and had a hard time leaving her alone.

Seeing her clumsiness, which resulted in her not being able to live a decent life by herself (in fact, she can’t even speak English), Manaka couldn’t just stand by and watch without doing anything, so he decided to look after her.

Sharing dinner with her on a daily basis, hanging out with her whenever she was lonely… They were almost living together before he knew it!

However, Manaka had already made a decision not to fall in love again!

“I won’t give up! Datte konna ni mo SU-SUKI nan desu kara!” [TN: she’s saying that she’s already fallen for him so hard. I don’t wanna tl cause title.]

Stella, on the other hand, had already made up her resolve and approached Manaka head-on!?

Dammit! What’s with this cute little creature!? You’re going to make my heart race, you know!