The Age of Humanity May Be Over, But We’re Still Hungry 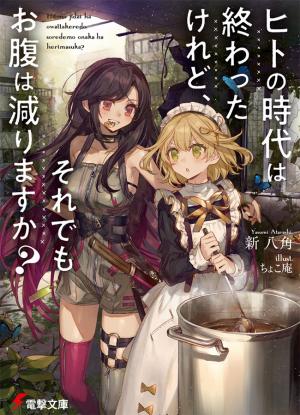 24th-century Tokyo is a ruin. Synthetic ‘food’ and electronic drugs practically spill out of the city as militant gangs roam the streets… but even in the end times, people have got to eat. After a long, hard day’s fighting, they flock a restaurant that can be called nothing short of a miracle — Garandou.

In the kitchen, the so-called ‘Encyclopedia of Edibles’ Uka works with an angelic smile. In the front, the former-mercenary-slash-waitress Lyco stares down would-be troublemakers. Every day brings the two girls a lust for new food. No matter what chaos they find themselves thrown into, their quest for full stomachs and fuller smiles knows no bounds — from man-eating dragons to lethal poison mushrooms, and even old attack drones!? The only sure thing is, they’ll eat well and have a great time.