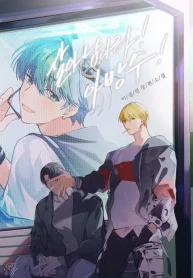 I grew up receiving plenty of love as the youngest member of a gangster family. The things I currently like the most are men’s passionate friendships and motorcycles. Although I’m slightly dumb, I could cover it with money, so I wasn’t dissatisfied with this world…

“Since your fans probably long for cheerful and refreshing Parkha-ssi! Can I ask for some aegyo to take a hold of their hearts~?”

In an instant, the atmosphere turned heavy as if someone had poured cold water over it. That’s right. This was the music show stage.

『To be reborn as a great idol, a compulsory penalty will be imposed!』

However, even if I regretted it, it was too late.

『Automatic selection is completed ♥ A choice has been automatically outputted!』