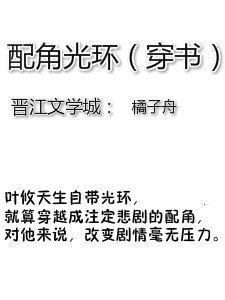 Ye You was one idle rich second generation, with good appearance and a large number of pursuers. He was amazing in whatever he does, even his luck was so good that people were envious of him. He was recognized as a darling of Heavens by all his friends.

But Ye You, who was enjoying his carefree life, suddenly traversed into a novel, not only that, he also transmigrating into a poor cannon fodder supporting role.

However, although Ye You had transmigrated, but his ability and luck, as well as his personality trait have not disappeared. No matter what kind of world he traversed to or what kind of person he crosses into, he will be a winner in life.

So he can only say to the protagonist; sorry, my supporting aura is more dazzling than your protagonist aura.