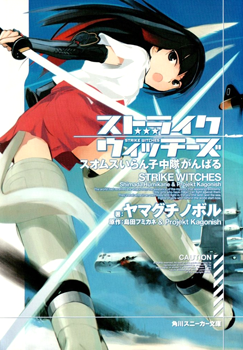 3 Volumes (Unfinished due to the author’s death)

In 1939, as the European mainland faced the crisis of a Neuroi invasion of unprecedented scale, Imperial Army and Navy Witches from the far off Fuso Empire were sent to the battlefield as volunteer soldiers. One such Imperial Army Witch, Anabuki Tomoko, an ace and hero to the people after her outstanding service during the Neuroi raid known as the “Fuso Sea Incident”, had been expecting to be sent to Karlsland, where the heaviest fighting was going on. However, she was instead deployed to the northernmost extreme of Europe, Suomus. There she meets the rest of her future fellow squadron members, none of whom had ever made a name for themselves in their former countries, instead being treated nearly like outcasts, half-baked witches without any talent or motivation. It’s now up to the “Misfits Squadron”, or officially the “Suomus Independent Volunteer Air Squadron”, to find out how they can stand up to the Neuroi menace. -taken from Baka-tsuki