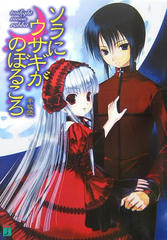 Due to various “reasons” having to leave his parents and living alone, is Kirimura Seiji. With his classmates and a very beautiful bishoujo named Fuyuki Youko (a forceful girl which actually wants the Kirimura Seiji for herself), he barely manages to pass through “normally” each day.

Until one day, falling out of the sky, is a girl wearing gothic attire. This cute little girl is called Yuu, and she claims to be a vampire. Her appearance is due to the fact that she is searching for her thousand year old reincarnated lover.

Originally he thought that she was raving mad, but never in his farfetched dreams would he have expected to find a Rabbit butler (Sekitoku) and a Steel Maid-en (Koshizu) (a combination android/maid) would appear to retrieve her (Yuu the vampire) home. With these new arrivals, Kirimura Seiji’s daily “normal” life is over, and triggers the beginning of his “very abnormal, love life”.