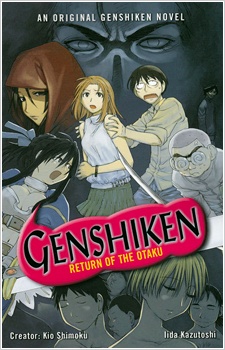 The deafening whack-whack-whack of a helicopter above campus is the first indication that the balmy tranquility of the Genshiken Club is about to be disturbed. The chopper brings handsome Ranto Hairu: transfer student, scion of a powerful Japanese conglomerate, and newly named chairman of the on-campus club organization committee.

Hairu has strong ideas about the kind of clubs that deserve to survive (earnest, industrious) and the kind that don’t (arty, frivolous), and he’s a big fan of brute force. For Madarame, Kousaka, Ohno, and the others, the idea of losing their cherished club is the ultimate nightmare—but it’s only the first of many.

Fortunately, the Genshiken boys and girls have a few tricks of their own, including a certain sword fighter summoned from ancient times who could prove very handy.