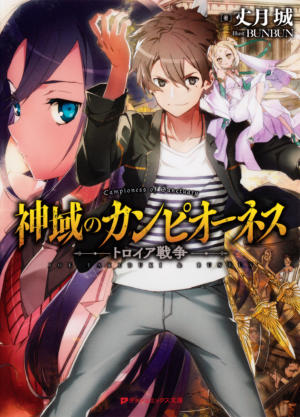 The alternate space Sanctuary that was connected to the world of mythology and brought disaster throughout the world.

Various monsters appeared in Kobe City at Japan that was connected to the world Sanctuary Troia that was told in Greek mythology, causing enormous damage.

In order to settle the situation, the beautiful girl who introduced herself as the greatest onmyouji in Japan and a reincarnation of god, Toba Riona was dispatched.

But, her goshujin-sama Rokuhara Ren was an “amateur” who couldn’t use any power despite being a member of the association 《Campiones》 that had the most influence in the world of magic.

Riona was exasperated at Ren who only relied in his running away and smooth talking. However, Ren had a trump card that enabled him to [summon god]……!

「Change the mythology’s synopsis without fail. If it’s necessary──then kill even the god.」

The king of gods Zeus, the goddess Athena, the hero Achilles……in the world that was packed with gods and heroes, Ren and Riona challenged a mission that was impossible for most human.

The challenge toward the sanctuary where even 《godslaying》 would be carried out without hesitation started now!