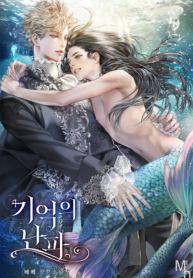 “Cruel and savage humans brutally slaughtered their kind to covet ours. For the sake of Atisa and our future generation, exchanges with them are prohibited forever.”

Hundreds of years have passed since exchanges with humans were banned, but the mermaid Rayan admires the world far outside.

One night, going out of the deep sea and looking outside, he witnesses the sun falling down. No, it was a boy who looked like the sun.

Rayan saves the boy and faces eyes bluer than the sea.

“Erich. My name is Erich. What’s your name?”

Unlike humans described in the precept, he looked small and fragile, the boundaries keep breaking down for the boy who shows a favorable curiosity to him.

Rayan eventually reveals his name and continues to interact with the boy.

Over time, the secret friendship between the human and mermaid gradually takes on a different color…