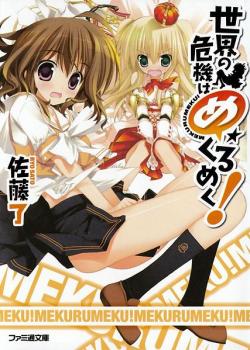 The protagonist was sleeping, and he did get to a white world with a phone booth in his dream. It rang, he answered. A girl on the other end claims to be God. Who the hell would believe such a dumb thing? “God” claims to grant him a power to save the world. HA! Who the hell would believe that? Fine, so he decided to make this dream end in a joke “Then give me the ability to upskirt girls!” HAHAHA The next day, he woke up, naturally he didn’t really give it much thought. But he still wanted to try it out, let me try upskirting that girl… And it happened!! After another try, he confirms that he has the power to upskirt girls(indirectly) with a swing of his hand upwards and crying “upskirt.” However, when a world crisis really starts coming to his town, a girl comes to gather the warriors that will save the world. And the kind and innocent girl(with ability to find comrades and sense the incoming crisis) asks… “What is your ability?” Note: This is a CUTE girl. Eventually, they gather all the comrades:

An otaku with teleportation abilitiy.

A kid with shielding abilitiy.

A girl that can sense comrades and incoming crisis.

A dog that can clone itself and talk.

A GUY THAT CAN UPSKIRT GIRLS.

And so, the protagonist sets off with the group to save the world with his mighty gift, THE POWER TO UPSKIRT GIRLS!!