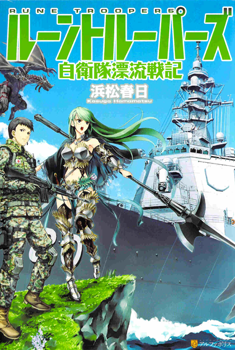 Hiroyaki Kuze, part of the Ground JSDF, was assigned to the fleet of JSDF ships being sent as reinforcements to a UN mission. The flagship of the fleet is the Aegis class Destroyer Ibuki. However on their way a girl with wings transported their fleet to another world. A fantasy world of Swords and Magic. Kuze’s platoon was sent out scouting to see where they were. His platoon found and landed in the capitol of the United Kingdom. Kuze’s platoon attempted to withdraw when there was an attack by the Filbolg Empire on the capitol. However when children were in danger they protected them. The Empire regards them as reinforcements for the Kingdom!

On land and sea the power of the JSDF in the arena of warfare explodes! The alternate world JSDF fantasy that was popular on the net has made it’s long awaited novel debut!