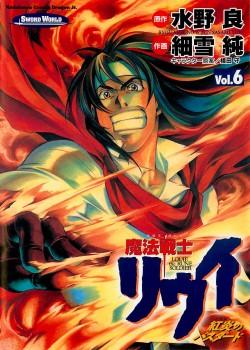 Few would consider Louie to be a sorcerer – especially Melissa, Merrill, and Genie. After all, what kind of “sorcerer” spends his time drinking at bars and beating the stuffing out of the local street thugs?

But much to the chagrin of these three gorgeous female adventurers, divine will has dictated that Louie, the enchanter-gone-street fighter, is in fact a prophesized hero–who they must pledge themselves to serve! Could this bad-boy possibly have what it takes to be a hero? Or has the war god Mylee made a mistake? With a bevy of babes at his side, Louie launches into a series of adventures that range from the harrowing to the bizarre.

Get ready for swords, magic, and lots of black eyes and broken noses, because when Louie fights, it’s no holds barred!