Rose Princess of Hellrage: Although I got Killed for Political Reasons, I got Revived as the Strongest Undead 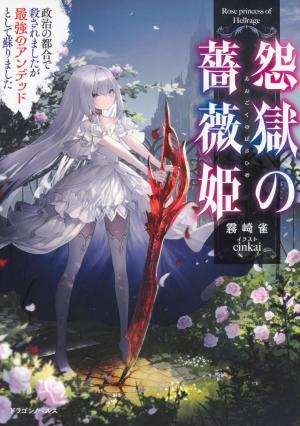 In the small country of Ciel-Terra, the Royal Prince staged a coup d’etat, killed his own brother, the former King and took control of the throne with the backing of the Four Great Kingdoms.

On her 10th birthday, René was apprehended by the knights of the Royal Prince faction for being a cursed child with silver hair and silver eyes and learnt that she was the abandoned Princess of the country. And so, branded as one who ‘was related to the depraved once-king’, she was put through hellish torture before being executed via guillotine.

As her head parted from her body, René remembered.

That, she once already lived life as a man by the name of Nagajiro Satou on Earth, and, falling victim to this world’s God flattery, was forcibly reincarnated.

And whilst in such a state, a woman who called herself an evil goddess appeared before her.

“Do you not detest him? The God who only kept half his word and reincarnated you in this form?”

“Do you not detest them? The people who pushed you to your death for their own convenience?”

“If you wish for vengeance, I shall bless you with a special Divine Protection.”

Thus René, in the name of revenge, rose as the strongest and most fearsome undead. Named Monster: Rose Princess of Hellrage. And eventually, she will end the world…