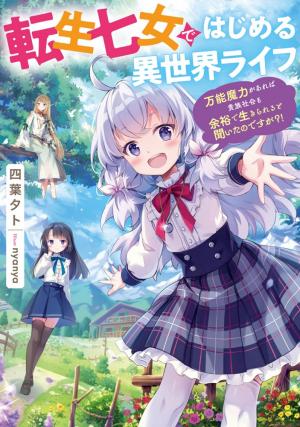 A high school girl, Kanami Miria, reincarnated as the seventh daughter of an aristocrat.

Since she had lived a miserable life, she dreamed of living peacefully in her second life.

However, she reincarnated in a super-poor aristocratic family in the countryside.

The lord was a muscle-brain.

The lady was a pushover.

The eldest daughter was a depressed woman.

The second daughter was a hussy who divorced after she cheated on her husband.

The son-in-law was a lolicon.

Moreover, she was forced to become engaged to a poor merchant.

The situation was even worse than her previous life.

「I swear I will get out of this house and live a peaceful life!」

In order to achieve her goal, she practiced magic and secretly went to the Royal Girls Academy.

「Now my second life has begun! I’ll make friends with cute girls and have a yakiniku party!」

But, thanks to her omnipotent magical power, her evaluation became ridiculous.

「An audience with me? Please, no!」

The easygoing Miria decided to ignore them and aimed for a relaxing and peaceful life with her omnipotent magical power.