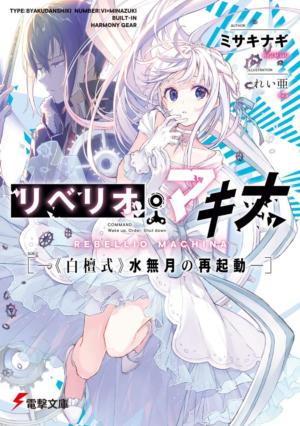 To oppose the deceitful world and save the lonesome princess—the young man raises the flag of rebellion.

The Anti-vampire Combat Automata, “Byakudanshiki”—the five siblings created by the genius machinist from the Principality of Helweiz, Professor Byakudan, were the heroes to save Europe from the invasion by the vampire army…… or so, they were supposed to be.

The “failed unit”, Minazuki the Sixth, wakes up after ten years to confront a reality that stupefied him.

His five siblings had their names engraved in history as “Carnage Automata” due to a rampage incident which was never supposed to occur.

Moreover, the Grand Duke signed a peace treaty with the Vampire Lord that turned the Principality into the only Republic in the world where humans and vampires live as equals.

Through the encounters with the daughter of the deceased professor, Kanon, and the Vampire Princess, Rita, Minazuki gradually gets used to this new “everyday”.

However, the curtain rises when the creeping tendrils of conspiracies entwines around him and the girls.

The Rebellio of the Machina starts now—.